If you guys were here when we moved in you’ll recall I spray painted the bedroom fireplace grill black and called it a day! I didn’t want to do to much to it because I wasn’t sure what I wanted! I finally got some ideas and pulled the trigger over the last 2 weeks and I really feel like it compliments the room well!!

I ended up painting the tile on the bottom black with chalk paint and it turned out SUPER crisp. I am loving it! I left the top because I thought a black rectangle would be weird. Then I tried white, did not like it. I found really cool peel and stick faux rock that would look AWSOME but you guys it was so expensive, we just couldn’t. I had accepted that it was staying as is until we had some money and time. THEN I realized I had some wallpaper left over from the laundry room which was like brick panels and I was like well brick is on fireplaces I’m just gonna go for this it’s grey it might compliment the black well! And here we are and I’m loving it. This was super quick for me because I had both the paint and the wallpaper! This is a great little update in my opinion for this fireplace in our bedroom just to give it some new life! I have like one million plus ideas for this fireplace EVENTUALLY but this definitely gave it more of an us feeling!

This site uses Akismet to reduce spam. Learn how your comment data is processed.

Looking for Something? Search Here! 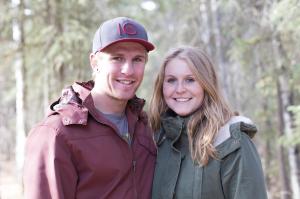 Welcome to Range Rd. Ranch Blog, full of home Decor & life! My name is Jamie and the handy man behind it all is Devin! We are happy to have you follow along on our journey as new acreage owners! We previously lived in a small townhouse, embracing the small living lifestyle. We recently moved out of town and are now learning all the in’s and outs of acreage lifestyle! Tag along to see us transform our ranch style 80’s house into our home & learn all about that acreage sustainable lifestyle!

Find us on our Socials